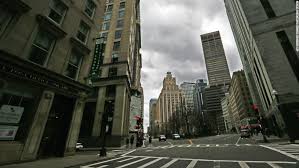 As the manhunt continues for the second suspect, Boston remains more of a ghost town rather than bustling metropolis. Mass transit to and from Boston has come to a stand still on Friday as police conduct a massive manhunt for the remaining suspect in Monday’s Boston Marathon bombing with the exception of air travel through Logan International Airport. Authorities have indefinitely suspended mass transit taking to twitter to inform people to “Go/ stay home.” As the manhunt stretched into the afternoon, Amtrak stopped all trained between New York and Boston as well as intercity bus lines  to the area. Passengers were allowed a refund or rebook for travel at a later date, while airline allowed customers to change plans without fees. In, Somerville, populations 75, 000, authorities told people to stay inside and lock their doors. The city went on lockdown Friday while the police continue their search for Dzhokhar Tsarnaev, the second suspect in the Boston Marathon bombing. Photos like the one above appeared online demonstrating the eery ghost town that is now Boston.

The hunt for 19 year old Dzhokhar Tsarnaev piked up late Thursday night after the shooting at MIT, while the other Boston suspect identified as his 26 year old brother Tamerlan Tsarnaev died after a police shootout. Sean Collier, a 26 year old Massachusetts Institute of Technology police officer, was shot and killed on Thursday night during a confrontation with the two suspects. Officers responded to a disturbance when multiple shots were fired according to Middlesex Acting District Attorney Michael Pelgro and Cambridge Police Commissioner Robert Haas. Collier was taken to a hospital where he was pronounced dead. According to the Associated Press, the two suspects not only killed the officer, but injured a transit officer in a firefight and threw explosive devices at police during their getaway attempt in a long night of violence leaving one of the suspects dead and the other at large on Friday. The authorities classify the 19 year old as a dangerous terrorist and according to the Associated Press comes from the Russian region near Chechnya, a region plagued with Islamic insurgency stemming from separatist wars.

On Friday at 3:15, according to eye witnesses, more than a dozen police cars were speeding to the UMass Dartmouth campus about an hour south of Boston adding to the strong police presences at the school where one suspect, Dzhokhar A. Tsarnaev, was a registered student. The authorities evacuated the campus Friday afternoon and announced the campus would be closed on Saturday after the manhunt for one of the suspects consumed the school. Students report seeing Tsarnaev on campus this week after Monday’s bombing as a result UMass Dartmouth announced the relocating of students to a nearby high school where transportation to and accommodations would be made.

The family of both men have spoken out for the two suspect brothers in disbelief condemning the police for such quick action without cause. Anzor Tsarnev, the father of Dzhokar and Tamerlan Tsarnev, said according to Lifenews.ru, “My children were simply framed, they [the police] should have simply waited. I am worried for the second.” When asked if his children had seen guns, he responded, “My children in their eye have never seen guns, if only on television. We went to America because of the political system.” Maret Tsarnev, the aunt of the two brothers, revealed the elder brother killed by police last night has a young child. Defending both young men to the Canadian Press on Friday, she said, “I do not believe these two boys have done that act of atrocity killing those people on the street and I will not believe that until, until I get evidence.”

In many cases when these acts of atrocities occur, the increase in hate crimes is likely to follow against groups believed to be involved. Muslim, Sikh, South Asian and Arab Americans tried to head off the backlash  that comes after such an act of terrorism by releasing a statement on Friday asking the country not to scapegoat innocent people. The collective statement read as follows:

Our thoughts and condolences continue to be with the victims of the Boston Marathon attacks. We are grateful to the brave first responders and law enforcement officers, who endangered their own lives in pursuit of the suspects and to keep the people of Boston safe.This is a time for us to come together as Americans during a sad and difficult moment. As information continues to emerge, we urge the media and the public to refrain from scapegoating or turning against our fellow Americans based on their racial, ethnic, religious or immigrant identity.

Incidences of violence against such groups has already occurred with a Muslim woman being attacked in the Boston area on Wednesday. The woman wearing a hijab was attacked by a man shouting that Muslims had perpetrated the twin bombing killing three people and wounding 170 Monday. Heba Abolaban, a Palestinian doctor who came to the United States from Syria, said she was punched in the shoulder in Malden, Mass. by a man who shouted “F*** you Muslims!” and “You are involved in the Boston explosions” according to the Malden Patch. The man a white male in his 30s shouted at the woman for two minutes before leaving the Patch reports. Polis Cheif Kevin Molis stated to the Boston Globe that, “No investigative strategy will be overlooked in order to determine who’s responsible for this. This is something that as a city and as a police department we take seriously.” While conservative commentators, like Glenn Beck, speculate Monday’s attack was perpetrated by Middle Easterners, the nationalities of the marathon bombers were still not know as of Thursday afternoon. However, the FBI on Thursday released photos of the suspects and enlisted the public’s help to track them down leading us to the manhunt in progress now.

The Return of the Modern Philosopher

Deep Thoughts from the Shallow End of the Pool