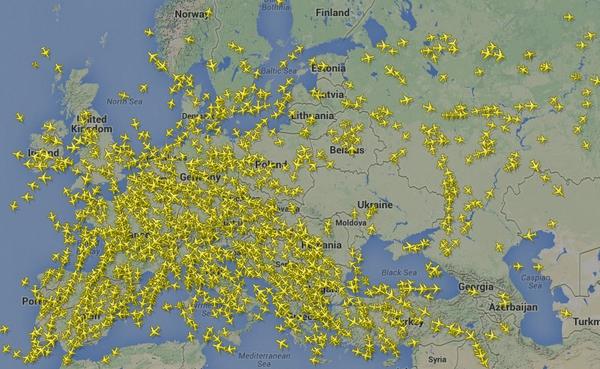 After the allege attack on a Malaysia Airlines commercial jet flying over Ukraine, international flights are being re-routed from their usual paths to avoid the war torn country. The twitter account PlaneTalking posted the dramatic re-routing in effect, according to Benjamin Hart’s article Flight Radar Shows Planes Avoiding Ukraine In Aftermath Of Malaysia Airlines Crash. The image taken from Flight Radar 24 tracks all planes in the air at a given time with many major airlines announcing their intention to bypass the country. This is the second Boeing 777 in Malaysia Airlines arsenal of planes to meet a disastrous end in less than five months. As Chris Brummitt reports,For Malaysia Airlines, disasters strike twice, the first occurred on March 8 when a Malaysia Airlines jet vanished an hour after take off from Kuala Lumpur causing an international mystery yet to be solved. On Thursday, the airline and the nation faced a new crisis as the same type of plane was reportedly shot down over Ukraine. Ukraine said the plane was brought down by a missile over Eastern Ukraine and further details are just beginning to emerge. Now the struggling airline and nation must grapple with another round of grief, recriminations, international scrutiny and serious legal and diplomatic implications. The Malaysian Prime Minister, Najib Razak, commented, “This is a tragic day in what has already been a tragic year for Malaysia.” Flight 370 went off course during a flight to Beijing and is believed to have crashed in the Indian Ocean far off the Western Australian coast. The search area has changed several times with no signs of the aircraft or the 239 people aboard. On Thursday, the wreckage of a Boeing 777-200ER plane was found in Ukraine after it went down with 283 passengers and 15 crew members. Officials believe that the plane was shot down at 33,000 feet in a region where heavy fighting between Ukrainian forces and pro-Russia separatists has increased in recent days. Additionally, the Prime Minister of Malaysia said, “If it transpires that the plane was indeed shot down, we insist that the perpetrators must swiftly be brought to justice.” No link between the two flights have been found. According to an email, Charles Oman, a lecturer at the department of aeronautics and astronautics at the Massachusetts Institute of Technology, said: “Given the military conflict in the region, one has to be concerned that identities could have been mistaken.” The investigation of the downed flight will be extremely sensitive as there will be legal and diplomatic implications depending on who was responsible. The accident will definitely inflict more financial damage on Malaysia Airlines. According to Brummitt, before the March disaster, the airline reported a $370 million loss in 2012 when most airlines were posting a 4.7 percent profit. After the Flight 370 disaster, passengers canceled flights, and even though the airline is insured, it faces uncertainty over payouts to the victims’ families.

Meanwhile, in Ukraine at the wreckage sites, emergency workers, police officers and even off duty coal miners on Friday searched the fields and villages of Eastern Ukraine for wreckage. As Peter Leonard and Dmitry Lovetsky report, Putin urges Ukraine cease-fire after plane attack, the attack on Thursday killed 298 people from a dozen countries including vacationers, students and a large contingent of scientists heading to an AIDS conference in Australia with 189 of the dead from the Netherlands. According to U.S. intelligence authorities, a surface to air missile brought down the plane, but could not say who fired it. The Ukrainian government in Kiev, the separatist pro-Russia rebels and the Russian government accused of supporting the rebels all deny responsibility. After an emergency session, the U.N. Security Council called for a full and thorough investigation by an independent group. On Friday, Russian President Vladimir Putin called for a ceasefire in eastern Ukraine and insist the two sides hold peace talks as soon as possible. Access to the crash site was hard and perilous as the road into Donetsk was marked by five rebel checkpoints on Friday with document checks at each. By midday, 181 bodies had been found, according to local emergency workers. A spokeswoman for Ukraine’s emergency service, Nataliya Bystro, said the rebel militiamen were interfering with the recovery but did not elaborate. It is not known if the separatist rebels had found the black box of the plane or not. Ukraine’s state aviation service closed the airspace Friday over two border regions gripped by separatist fighting, Donetsk and Luhansk, and Russian airlines suspended all flights over Ukraine. In Hrabove, large numbers of sticks made from tree branches affixed with red or whit rags mark where body parts were found. Ukraine Foreign Ministry representative Andriy Sybiga said the bodies will be taken to Kharkiv, a government-controlled city 270 kilometers (170 miles) to the north, for identification, according to Leonard and Lovetsky. Australian Prime Minister Tony Abbott demanded a thorough independent inquire stating, “The initial response of the Russian ambassador was to blame Ukraine for this and I have to say that is deeply, deeply unsatisfactory. It’s very important that we don’t allow Russia to prevent an absolutely comprehensive investigation so that we can find out exactly what happened here. This is not an accident, it’s a crime.” Russian Foreign Minister Sergey Lavrov dismissed Kiev’s accusations that Moscow was behind the attack. Among the passengers was a large group of world renowned AIDS researchers and activists traveling to an international AIDS conference in Melbourne, Australia. News of their death sparked an outpouring of grief across the global scientific community. In the Netherlands, flag flew at half staff as residents mourned the victims, while riders at the Tour de France took a minute to observe a moment of silence for victims before starting the day.