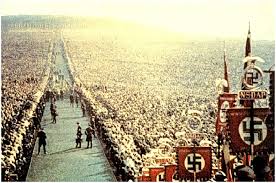 The comparisons are numerous only this time we managed to put ourselves smack-dab in the middle of the controversy that does not directly involve the United States. Isn’t this really a matter for the United Nations to take care of? Is history really going to repeat itself? The reason for the two photos is to compare the rallies of now and the rallies of the past which seem to look rather similar. In today’s times, a little overreaction goes a long way as the world prepares for some sort of conflict whether on a large scale like World War or on a smaller scale such as the Korean War: The Remix. Let’s look at the facts and decide for yourself whether they add up to something we all should be concerned about.

On Wednesday North Korea ratified, according to Reuters, the following:

“We formally inform the White House and Pentagon that the ever-escalating U.S. hostile policy toward the DPRK (North Korea) and its reckless nuclear threat will be smashed by the strong will of all the united service personnel and people and cutting-edge smaller, lighter and diversified nuclear strike means of the DPRK and that the merciless operation of its revolutionary armed forces in this regard has been finally examined and ratified,” a spokesman for the General Staff of the Korean People’s Army said in a statement carried by the English language service of the state news agency KCNA. (Writing by Kevin Liffey; Editing by Andrew Heavens)

If these are empty threats as most of the U.S. government even South Korea believes then why are we taking precautions? According to the Agence France Presse, the United States has set up THAAD missile defense battery to defend its bases on the Pacific island of Guam following threats from North Korea on Wednesday said the Pentagon. The news came after two Aegis anti-missile destroyers were sent to the western Pacific to intercept any North Korean strikes against the U.S. or allied targets. Guam is a U.S. territory 2100 miles southeast of North Korea in the Pacific Ocean which is home to 6,000 American military personnel, including Marines, submarine and bomber crews (hello, Pearl Harbor).

Does the United States actually know what technology North Korea has or doesn’t have? Short answer would be no. North Korea reports the Associated Press moved a missile with considerable range to the east coast on Thursday according to South Korea’s defense minister but said there was no sign of the North preparing for full scale conflict. The report came hours after he statement release to authorize the attack on the U.S. see above. It is believed that the North at this time does not have the technology to miniaturize nuclear bombs in order to mount them on long range missiles. South Korean Defense Minister Kim Kwan-jin has dismissed reports in the Japanese media that the missile could be a KN-08 which does have the capabilities to hit the United States if operable. He believes the missile does not have enough range to hit the U.S. mainland and could be the missile know to the North Koreans as Musudan with a range of 1800 miles which could make South Korea, Japan and U.S. bases in both countries targets even though he doubts the accuracy of the missile.

Analysts and experts see the threats of strikes and a potential war as North Korea’s way to provoke softer policy with South Korea, to win diplomatic talks with Washington and to show the strength of their leader Kim Jong Un. As Kim has said the North is not preparing for a full scale conflict as they have shown no signs of mobilization of troops, but does worry about a small scale provocation against the South as in 2010 with the shelling of a South Korean island where four people were killed. The N0rth has become increasingly agitated by the joint U.S. South Korean military exercises taking place in the South as well as the U.N. sanctions for its February nuclear test.

With all the rhetoric it makes hard to believe that full scale war will break out, but some of North Korea’s actions do have some cause for concern. On Tuesday, North Korean announced the restarting of their plutonium reactor and the construction need to restart has already begun according to the U.S. research institute. For the second day on Thursday, the Northern border authorities denied entry to South Korea who manage jointly run factories in Kaesong in North Korea, but allowed South Koreans to return home. The South has already come up with a plan if the North takes workers hostage in Kaesong according to Defense Minister Kim. North Korea has started working to rebuild their nuclear arms program especially working toward an atomic bomb small enough to mount on a long range missile as Kim Jung Un has made it a priority for the North to build their nuclear arsenal along with rebuilding their economy. The U.S. Korea Institute at Johns Hopkins School of Advanced International Studies looked at recent commercial satellite imagery of Nyongbyon nuclear facility which was shutdown in 2007 under the disarmament agreement discovered that one cooling tower for the reactor was destroyed in 2008. As the Associated Press reports the analysis published on Wednesday to the institute’s website, 38 North, says the tower will take six months to rebuild but a recent March 27 photo shows the building may have already started for an alternative cooling system that could be operational in weeks even though experts believe it could take three months to year to restart the reactor.