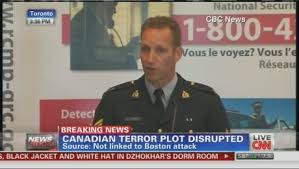 On Monday Royal Canadian Mounted Police announced that Raed Jaser and suspected accomplice Chiheb Esseghaier were arrested in connection with a planned derailment of a Via Rail Canada train within the country, New York Times reports. The police have yet to figure out the details of the plot, but do credit members of the Canadian Muslim community for tipping off authorities to a terrorist plan to attack a train with both men allegedly working with al Qaeda. Muhammad Robert Heft, a Muslim leader in Ontario, told the Toronto Sun the imam of a local Muslim community helped foil the plot by alerting authorities. Heft has this to say,”At the end of the day, it’s not how you dress, it’s how you think. In our community we may look a little different, but in our hearts we love Canada. It’s our country. It’s our tribe. We want safety for all Canadians regardless of their religion.” And to those misconceptions and stereotypes of Muslims such as not sharing information, he told the Sun, “We have to be on the front lines. To either nip it in the bud in the very beginning or cooperate with authorities so they can be brought to justice.”

According to Huff Post, Heft told CNN the Canadian police informed the Islamic community Monday during a briefing about imam’s help in the capturing and subsequent prevention of the terrorist plot. Heft had this to say to the RCM police, “We are supportive and thankful that the RCMP did the investigation and was able to apprehend the individuals before anything happened. We are pleased that they took us in and explained what was going on.”  The two men involved have  been under close watch for over a year and Imam Yusuf Badat, of the Islamic Foundation of Toronto, told Canadian CBC that tips from the Muslim community led to the capture Monday. U.S. Ambassador David Jacobson added the two men were arrested following cross boarder operations and in a statement says,”It underscores the fact that we face serious and real threats, and that security is a shared responsibility. We all need to remain vigilant in confronting threats and keeping North America safe and secure.” The accused men were arrested because, according to the Associated Press, they received instruction and guidance from member of al Qaeda in Shiite led Iran even though the group is a Sunni Arab network. The penalties being brought against the men include conspiracy to carry out an attack and murder people in association with a terrorist organization.