In the end, we are all saints and sinners on the same road to redemption whether we think we can do no wrong or have. We all owe a death there are no exceptions. We can only hope that death will be kind and our legacy will live on guiding the next generation towards a better world. The nature of man cannot be summed up as good or bad as each individual exhibits both characteristics of saints and sinners influencing the world as we all play our parts. Humans are fallible creatures who are two faced in nature with one face we proudly show the world and one face we hide from the world. The human condition is full of contradictions whether we choose to accept the truth or not as we wage wars for peace, preach judgement even hate in the name of God, use morality and ethics to satisfy our own needs and continue to hide behind a thin veil of truth and deception. Whether you choose to believe it or not, as a global community we are all responsible for the treatment of our fellow man and must decide to do right without the possibilities of rewards in this life or the next. As the Great Dictator (Charlie Chaplin) once said:

“If we never experience the chill of a dark winter, it is very unlikely that we will ever cherish the warmth of a bright summer’s day. Nothing stimulates our appetite for the simple joys of life more than the starvation caused by sadness or desperation. In order to complete our amazing life journey successfully, it is vital that we turn each and every dark tear into a pearl of wisdom, and find the blessing in every curse.” ― Anthon St. Maarten, Divine Living: The Essential Guide To Your True Destiny

“Are the great spiritual teachings really advocating that we fight evil because we are on the side of light, the side of peace? Are they telling us to fight against that other ‘undesirable’ side, the bad and the black. That is a big question. If there is wisdom in the sacred teachings, there should not be any war. As long as a person is involved with warfare, trying to defend or attack, then his action is not sacred; it is mundane, dualistic, a battlefield situation.”
― Chögyam Trungpa, Cutting Through Spiritual Materialism

“Aristotle raped reason. He implanted in the dominant schools of philosophy the attractive belief that there can be discrete separation between mind and body. This led quite naturally to corollary delusions such as the one that power can be understood without applying it, or that joy is totally removable from unhappiness, that peace can exist in the total absence of war, or that life can be understood without death.
—ERASMUS, Corrin Notes”
― Brian Herbert, The Butlerian Jihad

“One thing yo learn when you’ve lived as long as I have-people aren’t all good, and people aren’t all bad. We move in and out of darkness and light all of our lives. Right now, I’m pleased to be in the light.”
― Neal Shusterman, Unwind

“We, all who live, have
A life that is lived
And another life that is thought,
And the only life we have
It’s the one that is divided
In right or wrong.”
― Fernando Pessoa 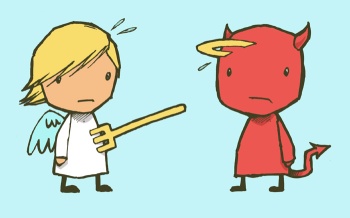 “How wonderful it would be if everything could always be as clear and simple as it used to be when you were twelve years old, or twenty years old. If there really were only two colors in the world: black and white. But even the most honest and ingenuous cop, raised on the resounding ideal of the stars and stripes, has to understand sooner or later that there’s more than just Darkness and Light out on the streets. There are understandings, concessions, agreements. Informers, traps, provocations. Sooner or later the time comes when you have to betray your own side, plant bags of heroin in pockets, and beat people on the kidneys—carefully, so there are no marks.”
― Sergei Lukyanenko, Night Watch

“Balsa seemed invincible, endowed with powers no other warrior could match, but in her profile he could glimpse the shadow of a young girl, hurt and buffeted by a cruel and hopeless fate. If he had never experienced what it was like to be at the mercy of fate himself, he would not have noticed, but now he could see it with unbearable, heartrending clarity.”
― Nahoko Uehashi, Guardian of the Spirit

“With each daunting step, the armor I’d always worn like a protective cloak unraveled, and my footing faltered.”
― E.R. Pierce, Duality

Without wearing any mask we are conscious of,
we have a special face for each friend.
– Oliver Wendell Holmes

There’s the private persona and the public persona
and the two shall never meet.
– Liev Schreiber

We all have a social mask, right?
We put it on, we go out, put our
best foot forward, our best image.
But behind that social mask is a personal truth,
what we really, really believe
about who we are and what we’re capable of.
– Phil McGraw 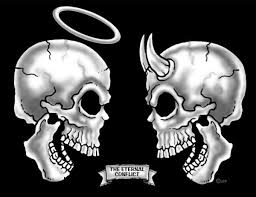 “What if evil doesn’t really exist? What if evil is something dreamed up by man, and there is nothing to struggle against except out own limitations? The constant battle between our will, our desires, and our choices?”
― Libba Bray, Rebel Angels

All things in the world are two. In our minds we are two, good and evil. With our eyes we see two things, things that are fair and things that are ugly…. We have the right hand that strikes and makes for evil, and we have the left hand full of kindness, near the heart. One foot may lead us to an evil way, the other foot may lead us to a good. So are all things two, all two. Chief White Eagle of the Pawnee

Humankind has not woven the web of life. We are but one thread within it. Whatever we do to the web, we do to ourselves. All things are bound together. All things connect. Chief Seattle (1780 – 1866)

An old Cherokee chief was teaching his grandson about life…
“A fight is going on inside me,” he said to the boy.
“It is a terrible fight and it is between two wolves.
“One is evil – he is anger, envy, sorrow, regret, greed, arrogance, self-pity, guilt, resentment, inferiority, lies, false pride, superiority, self-doubt, and ego.
“The other is good – he is joy, peace, love, hope, serenity, humility, kindness, benevolence, empathy, generosity, truth, compassion, and faith.
“This same fight is going on inside you – and inside every other person, too.”
The grandson thought about it for a minute and then asked his grandfather,
“Which wolf will win?”
The old chief simply replied,
“The one you feed.”

“I believe that unarmed truth and unconditional love will have the final word in reality. This is why right, temporarily defeated, is stronger than evil triumphant.”
― Martin Luther King Jr.

“People couldn’t become truly holy, he said, unless they also had the opportunity to be definitively wicked.”
― Terry Pratchett, Good Omens

“In each of us, two natures are at war – the good and the evil. All our lives the fight goes on between them, and one of them must conquer. But in our own hands lies the power to choose – what we want most to be we are.”
― Robert Louis Stevenson

“And this is the forbidden truth, the unspeakable taboo – that evil is not always repellent but frequently attractive; that it has the power to make of us not simply victims, as nature and accident do, but active accomplices.”
― Joyce Carol Oates

“The fact is that we have no way of knowing if the person who we think we are is at the core of our being. Are you a decent girl with the potential to someday become and evil monster, or are you an evil monster that thinks it’s a decent girl?”
“Wouldn’t I know which one I was?”
“Good God, no. The lies we tell other people are nothing to the lies we tell ourselves.”
― Derek Landy, Death Bringer

“Maybe it’s not as clear-cut as that. Maybe it’s the very presence of one thing – light or darkness – that necessitates the existence of the other.
Think about it, people couldn’t become legendary heroes if they hadn’t first done something to combat darkness. Doctors could do no good if there
weren’t diseases for them to treat.”
― Jessica Shirvington

“If you boil it down, just because someone else does the wrong thing we are not exempt from doing what’s right.”
― E.A. Bucchianeri, Brushstrokes of a Gadfly

“People may be persuaded that the machine is doing good. In fact, good is only capable of being done on a small scale. Evil is more versatile. You can hate those you have never seen, all the vast multitudes of them, but you can only love those you know — and that with difficulty.”
― John Christopher, Sweeney’s Island

“You think that your laws correct evil – they only increase it. There is but one way to end evil – by rendering good for evil to all men without distinction.”
― Leo Tolstoy, Christians and the Law-Courts

“Would you like to save the world from the degradation and destruction it seems destined for? Then step away from shallow mass movements and quietly go to work on your own self-awareness. If you want to awaken all of humanity, then awaken all of yourself. If you want to eliminate the suffering in the world, then eliminate all that is dark and negative in yourself. Truly, the greatest gift you have to give is that of your own self-transformation.” ― Lao Tzu

Realize that we as human beings have been put on this earth for only a short time and that we must use this time to gain wisdom, knowledge, respect and the understanding for all human beings since we are all relatives. Cree Proverb.

“Man doeth this and doeth that from the good or evil of his heart; but he knows not to what end his sense doth prompt him; for when he strikes he is blind to where the blow shall fall, nor can he count the airy threads that weave the web of circumstance. Good and evil, love and hate, night and day, sweet and bitter, man and woman, heaven above and the earth beneath–all those things are needful, one to the other, and who knows the end of each?”― H. Rider Haggard, She

One thought on “Saints and Sinners: A Dual Existence”