Two things about this bill…one people will counter it almost definitely with Roe V. Wade and two this will be played out in the court of public opinion. In one state, the right to choose is being challenged and now only needs one signature in order to be the first laws of their kind in the United States to ban most kinds of abortion. The North Dakota State Senate passed two anti-abortion bill on Friday that would prevent an abortion as soon as the fetal heartbeat is detected as early as six weeks and the other bans abortions in cases of fetal abnormalities such as Down Syndrome. House Bill 1456, the heartbeat ban, passed the North Dakota House earlier this year and will now head to Governor Jack Dalrymple’s (R) desk to be signed, Huff Post reports. The law would make doctors subject to a $5,000 fine and up to five years in prison if an abortion is performed after the fetal heartbeat is detected surpassing Arkansas’ new 12 week abortion ban. The bill passed without any discussion in the Republican controlled Senate on Friday. The Senate also passed House Bill 1305, which bans abortions based on gender selection or genetic defect, while three other states Pennsylvania, Oklahoma, and Arizona ban abortion base do gender, North Dakota is the first state to do so with fetal abnormalities. Opponents have already chimed in to argue that the heartbeat bill puts undue burden on woman’s constitutionally protected right to abort in some cases where a woman does not realize she is pregnant. State Rep. Bette Grande (R) who authored the bill said during her Senate testimony this week that she is unconcerned with their constituitionality explaining that, “Whether this is challenged in court is entirely up to the abortion industry. Given the lucrative nature of abortion, it is likely that any statute that reduces the number of customers will be challenged by the industry.” The Center for Reproductive Rights is represent North Dakota’s only abortion clinic, the Red River Women’s Clinic, in a case challenging the restriction of abortion medications used in the first trimester, while North Dakota lawmakers are looking at a personhood bill that would give the fertilized egg legal personhood rights requiring abortion physicians to be granted admitting privileges at the hospital. The center wants of course Dalrymple to veto both abortion restrictions commenting that, “This will not stand. We strongly urge Governor Dalrymple to protect the rights and health of the women of North Dakota by vetoing this noxious and dangerous bill.” Dalrymple has three days to veto the bill. 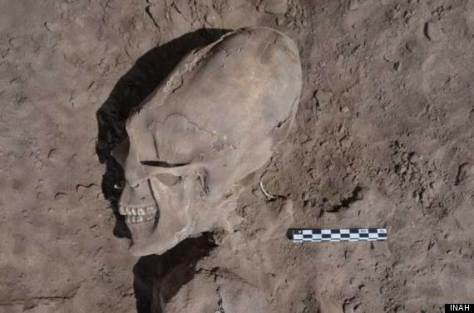 Interesting ritual from this ancient civilization in Mexico discovered in 1999. The skulls as part of a ritual were from birth made to resemble something similar to the cone heads on SNL . When you were born two boards were wrap around your head to force the baby skull to deform into this shape. The skulls 13 in all were dates to about a 1000 years ago. Interesting ritual don’t you think.

Interesting birth rituals some I have heard of and some are new to me. The most shocking is the Indian ritual at a Muslim shrine where the baby is tossed off the side of the temple and caught by the congregation as a symbol of good luck. Wow it is rough being a kid nowadays. The others like being confined to your room for 30 days or having your mother in law wait on you or even holding your newborn for a 105 days doesn’t seem as bad. Hey we all have our different methods and superstitions surrounding birth.